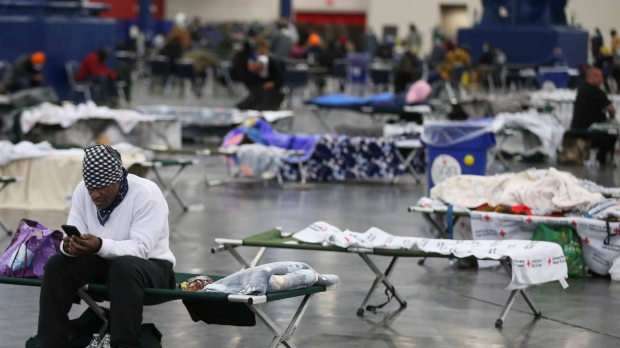 As Texas begins restoring power after a devastating week of freezing temperatures and winter storms, the state is confronting a new crisis: overwhelmed water systems that could extend misery for much of the population.

Leaks caused by frozen pipes have pushed the water supply to the brink. About 13 million Texans, nearly half the state’s population, remained under a boil-water advisory Thursday, according to Executive Director for the Texas Commission on Environmental Quality Toby Baker. More than 700 water supply systems are impacted.

“We know that there are tens of thousands of leaks,” Meszaros said. “As the fire department indicated they have responded to thousands upon thousands of burst pipes.”

At the peak from Tuesday night into Wednesday, the system lost 325 million gallons, he said.

“That is an incredible amount of water. Nothing I’ve ever seen before,” he said.

While temperatures in the 60s and 70s are expected to provide relief next week, some Texans face another round of record lows Friday night into Saturday morning. More than 25 million people were under a hard freeze warning through Friday morning for parts of Texas, Oklahoma, Arkansas, Louisiana and Mississippi.

The conditions have placed Texans in dire circumstances all week, with many boiling snow for water or having to burn household items for heat.

In Carrollton, north of Dallas, John Mays, Jon Milton Blackburn and their three children had no heat or water in their home starting early Monday. To fuel the fireplace, the family resorted to ripping up baseboards to stay warm.

It was either that, or we were going to go after the dining room table next,” Mays told CNN’s Don Lemon on Thursday.

After a water pipe burst, the family sought shelter at their church, and expressed gratitude for local leadership providing warming stations.

“If anything, this has been such a wonderful learning lesson for us on how important community is, and how important it is to stay together as a community,” Mays said.

“They have been creative, from trucking water in for consumption to collecting rainwater to use for flushing toilets,” Smith said. Both facilities, Smith said, were “still effectively caring for our patients.”

In Waco, Mayor Dillon Meek asked residents, industrial and commercial users to conserve water due to lack of supply available.

Meek said all businesses should cut water consumption by at least 50%. He also encouraged carwashes and laundromats to stay closed through the weekend. Restaurants were asked to use paper plates and other disposable items rather than washing dishes.

“Our water supply is critically low. We are currently pumping all we can, but the main problems we are facing right now are leaks and high usage,” Meek said In a video message Thursday. ” We are pumping twice our normal daily usage.”

If the situation worsens, some areas may not have water at all depending on water system pressures and elevation, he warned.

“And if system conditions worsen even more than that, the fire department could not have water for firefighting,” he said. “Our city staff has developed and continues to develop alternative methods for fire protection.”

One department near San Antonio was already at that point.

Many of the hydrants on the scene were frozen and there was no water, Bialick said. Crews needed to go down the street to fill their water tenders.

“That’s our problem. Once we make a little bit of advance on the fire, we run out of water,” he said.

Bialick told CNN affiliate KABB that fire crews are expected to work through the night. No injuries have been reported.

Broken pipes coupled with the unseasonable freeze have damaged countless homes and businesses.

Dallas resident Thomas Black shared an image on social media that went viral, showing icicles hanging from a ceiling fan. He told CNN’s Chris Cuomo on Thursday that he and his girlfriend were “managing” and that he resorted to boiling water after receiving tips from strangers.

He said that many of his neighbors had to go to other homes that had power, yet he raised concerns about gatherings given the current Covid-19 pandemic.

“Lack of preparedness…our infrastructure is just not ready for something like this,” Black said when asked how the water got on the fan.

Black has also posted other pictures from his apartment building of flooded hallways, water pouring from ceilings in utility closets, and iced over indoor entryways.

When asked why he decided to post the images on social media, Black said, “I think every Texan’s blood should be boiling that this is even the reality that we’re living in…we’re in a bad situation and it’s getting worse.”

GOVERNMENT RESPONSE TO THE STORMS

Gov. Greg Abbott announced late Thursday that a major disaster declaration was sought by the state from the federal government, which “will allow eligible Texans to apply for assistance to help address broken pipes and related property damage,” according to a press release.

U.S. President Joe Biden spoke with Abbott about the winter storms Thursday, and a statement from the White House said the president “shared his intentions to instruct additional federal agencies to look into any immediate steps that could be taken to support Texans.”

Abbott also intends to ask the legislature “to mandate the winterization of Texas’ power system and for the Legislature to ensure the necessary funding for winterization,” according to the press release.

Abbott spoke earlier Thursday about the Electric Reliability Council of Texas (ERCOT), which manages the state’s power grid, and took ownership for the failures to provide Texans with heat and power during the storms.

“I’m taking responsibility for the current status of ERCOT. Again, I find what has happened unacceptable,” he said.

“We have already begun the process to make sure that events like this, never again happen in Texas, and it starts with reforming the agency in charge of electric reliability in Texas, which is not what happened this week,” Abbott said.

“Five days before the winter storm hit, the ERCOT CEO assured ERCOT, and I quote, ‘We’re ready for the cold temperatures coming our way.'”

CNN reached out to ERCOT for comment on the governor’s latest statements.

ERCOT said in a statement Thursday it had made “significant progress” restoring power overnight. The ongoing cold was affecting the system’s power generation, however, and rotating outages may be needed over the next couple of days, the company said.

ERCOT officials also said that the power grid was “seconds or minutes” away from catastrophic failure and a complete blackout if not for controlled outages implemented early Monday.

About 180,000 customers still were without power Friday morning, according to Poweroutage.us, from Central to East Texas. More than 3 million outages were reported during the storms’ peaks.