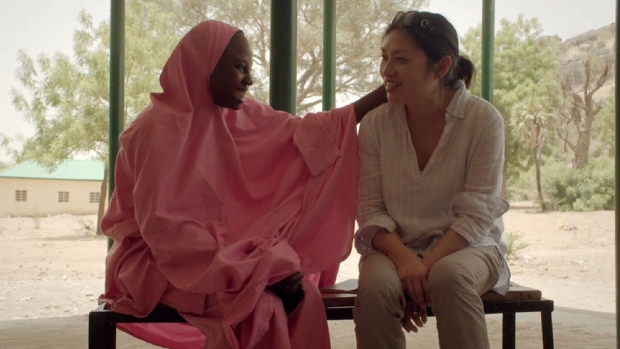 These are the words of Aisha, a hunter whose prey is plaguing Nigeria: the Islamist terror group Boko Haram.

Aisha leads groups of men into the forests to find and free women who have experienced being abducted, tortured and raped by Boko Haram’s members.

Her story is featured in the new TVO documentary “Captive,” helmed by Canadian journalist Mellissa Fung.

Fung, herself a survivor of a kidnapping while working for the CBC in Afghanistan in 2008, spoke to CTV News’ Chief Anchor and Senior Editor Lisa LaFlamme about “Captive,” and the women fighting back against Boko Haram’s atrocities.

“I think we all remember where we were in April 2014 when we woke up to the news in that 276 had been kidnapped by Boko Haram and disappeared into the Sambisa forest,” Fung said, speaking from London, U.K.

Fung said she remembered waking up, and was horrified — for her, the very word “kidnapping” is a trigger.

“I was horrified like everybody else that, overnight, all these girls could be vanished and disappeared…I did some more reading and discovered that Boko Haram is very much like the Taliban in their ways of not wanting girls to go to school,” she said. “In fact, Boko Haram means ‘western education is forbidden’ in Hausa, and that horrified me even more.”

Finding out that the 276 girls taken in April were only a “fraction of the thousands of girls” the militants had taken into the forest over the years made Fung realize “this was a story we needed to hear about.”

One of the voices in the documentary is Aisha. The youngest of 10 children and the only girl – she followed in her father’s footsteps and became a hunter, but her prey is human.

“She is an amazing character,” Fung said. “A few years back the Nigerian government decided to ask local hunting groups for their help in the fight against Boko Haram. Going into the forest, rooting out militants and rescuing people…Aisha is the female leader of this hunting group.”

“She really feels like there is some justice because she’s rescuing these girls and she’s a woman leading a band of men into the forest to fight back.”

As to whether she spoke of her own journey of kidnapping with the documentary subjects, Fung said yes – through sharing, the girls opened up to her.

“They knew. I made sure that they knew what my background was and I told them, ‘You can ask me anything you want,’” Fung said.

“I think they were able to open up to me in a way that only people with shared experiences sadly can.”

But Fung admitted that she was hesitant at first, saying she felt her story had been “told and told and told,” but that another member of the documentary team encouraged her.

“I could be the bridge from the audience to these girls. And you know, it was a risk, because journalists don’t want to be the story – I never wanted to be the story,” she said. “But if what I went through can help these girls tell their stories then it was worth it.”

“Did I look like that? Was that me when I first came back from my captivity?” Fung said, adding that it is still hard for her to go back to that “dark place.”

“The hole where I was held, that’s a part of who I am now… but if going back there can help us talk about things we don’t talk about enough — you know sexual violence, women and girls being disproportionately affected in conflict – then it’s OK.”

Part of the documentary covers the efforts of various NGOs on the ground trying to help survivors of Boko Haram’s violence integrate back into their communities.

“You know I had the best trauma counselling in Canada when I came back from Afghanistan,” Fung said. “Mental health in that part of the world is a luxury…so I think we need to support the great NGOs on the ground who are bringing that support and psychotherapy to these girls and these women who so badly need it because they have been so traumatised.”

One of those programs is run Dr. Fatima Akilu, who Fung said pioneered the program “counsellors on wheels.”

“She sends counsellors and therapists on tuk-tuks to remote villages to talk to women and girls who have escaped Boko Haram to help them through their trauma,” Fung explained. “She’s got a school and rehabilitation centre where she can only take 100 girls at a time to give them art therapy, music therapy and computer skills to prepare them to integrate them back into the community.”

But not all the characters in the documentary have such celebrated accomplishments.

Fung spoke of a woman called “Mama Boko Haram” who claimed to know members of the militant group when they were children, and that she was able to reach out to them directly as a sort of medium.

“She claims she knew them [as children] and she still knows them and she can send emissaries to the forest to convince them to return kidnapped girls, to come out of the forest, to surrender their weapons. Whether or not the government condones that she does this is something that we were never able to figure out,” Fung said, adding that “Mama” has since been arrested for fraud.

“There is good and there is evil and she really straddles that line for me in the film.”

Fung said she is still in touch with the girls she interviewed for the documentary, and with the COVID-19 pandemic shutting down schools, she has been co-ordinating with a local Nigerian journalist to get the girls tutors so they can raise their grades enough to re-enter classes.