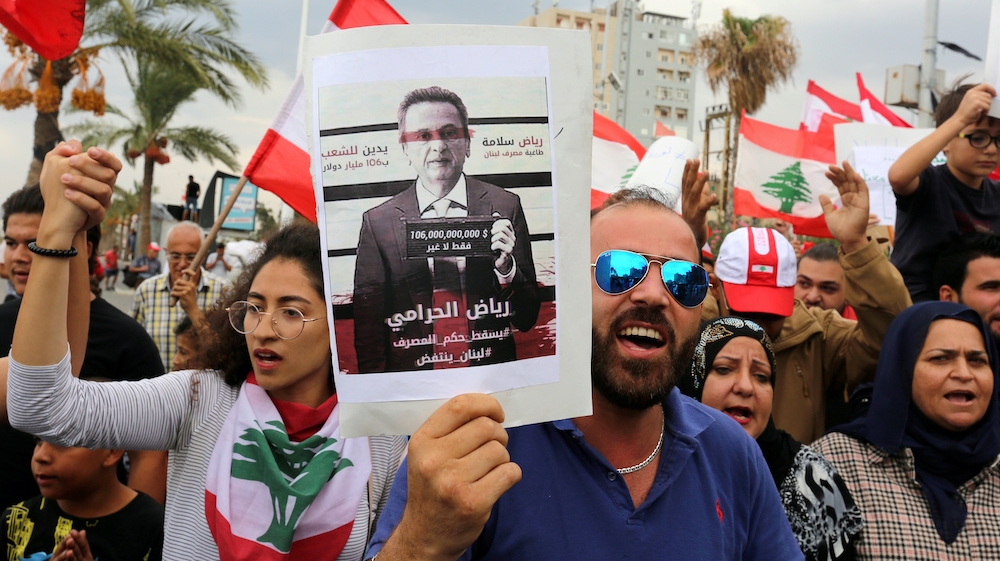 Beirut, Lebanon — An investigative judge was set to question the governor of Lebanon’s central bank and others on Monday on charges of dereliction of duty and breach of trust.

Riad Salameh, governor of Lebanon’s central bank since 1993, has come under increased scrutiny for his management of Lebanon’s economy since the country’s finances began to unravel in 2019.

A Lebanese judiciary source told Al Jazeera the charges are related to the disbursement of US dollars to currency exchange brokers.

It is alleged that Salameh and others at the central bank – known locally as Banque du Liban – failed to ensure that the foreign currency provided to the brokers at a lower than the market rate was used to buy goods such as foodstuffs that remain subsidised by the government.

The judiciary source said the disbursements had begun in the middle of 2020 and were continuing until now, totalling tens of millions of dollars.

The 80 percent devaluation of Lebanon’s currency since 2019 has left more than half of its residents in poverty and made imported goods unaffordable for many in a country that has little local industry.

The International Monetary Fund and foreign countries have conditioned economic aid to Lebanon on the government making political and economic reforms, including an independent forensic audit of the central bank that has until now been blocked by Salameh.

The country also defaulted on its foreign loans for the first time in 2020.

For decades, Lebanon was one of the few countries in the world that maintained a fixed – rather than floating – exchange rate for its currency. The Lebanese lira was pegged at 1,507 to the US dollar, with the central bank subsidising the difference, as well as the import of many staple goods, from fuel to flour.

As the country’s foreign currency reserves have deteriorated in recent years, speculation on the lira increased, driving parallel exchange markets.

On Monday, exchange shops in Beirut’s Hamra neighbourhood, where the central bank is located, confirmed that many brokers, whether they receive dollars directly from the central bank or not, use the market rate, which currently hovers around 8,800 Lebanese lira to the US dollar.

Officially, exchange houses and banks are now mandated by the government to trade at 3,900 lira to the US dollar. The 1,507 rate is even still used for the purchase of some goods, such as fuel.

A representative of Salameh and other central bank officials declined comment on Monday.

Salameh is also subject to a money-laundering probe by Swiss officials, and has said he will travel to Switzerland to be questioned by authorities there. His office declined to respond to a request for information about when that might happen.

The government has at times in the last year cracked down on exchange shops that have failed to comply with its orders, but has largely failed. While some traders using the market rate were initially circumspect about it, licensed brokerages now do so openly.

“In theory exchange houses are not allowed to sell at the higher rate, in reality they are doing it all the time,” said Dan Azzi, a financial analyst and former banker. “If they wanted to get around the law, they could make a lot of money.”

Despite the openness of the trade, the prosecutor’s case might be a tough one.

“We’ve seen multiple rates in other countries, the devaluation and the default of the government debt, we’ve seen banking collapse and high unemployment, but I don’t think we’ve ever seen all of them at once,” Azzi said.

Prior to the collapse, Lebanese banks offered consumers savings and checking accounts in US dollars with interest rates sometimes reaching up to 30 percent – a rate unheard of in other countries. But even if it seemed too good to be true, many consumers embraced short-term gains before things went south.

“There will come a day when people will write that Lebanon ran the largest Ponzi scheme in history. We ran a regulated, $180bn Ponzi scheme.”

Lebanon’s economic malaise does not appear to be reversing any time soon, as efforts to form a new government have been stalled for more than six months and the IMF and others predicting its economy will fail to grow significantly or even constrict further in the coming year.