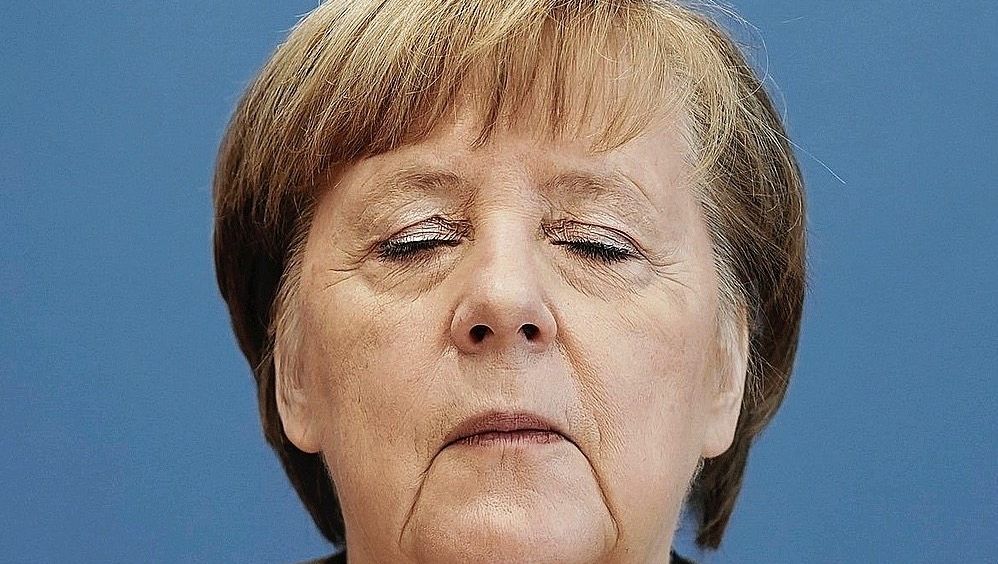 Before the arrival of the pandemic, the script for the final phase of Angela Merkel’s tenure as chancellor had essentially been written. The tone would be a mixture of admiration and premature nostalgia. Every comparison with a possible successor would put Merkel in an even better light.

The worship of Merkel then became even more adoring in the first phase of the coronavirus pandemic, with Germany having emerged with far fewer bumps and bruises than other countries in Europe. Some of that was luck, but some of it wasn’t. Merkel had recognized the dangers presented by the virus early on and introduced the correct measures. In one of her rare speeches to the nation, she found the correct tone of concern and solidarity, thus motivating millions of Germans to stay home. Had she resigned last summer – which she obviously could never have done in the middle of such a crisis – she would almost certainly have been sanctified.

Last spring, at a time when we still knew little about the virus, closures were the only effective instrument that politicians had available to them. There was no real necessity for creativity or elan to do the right thing. All policymakers had to do was close the country down. And Merkel did so with the necessary conviction.

Locking down the country remains Merkel’s best trick until today. She is better at it than anyone else in Germany, particularly when compared to many of the governors of Germany’s 16 states. Back in mid-October, when a majority of state governors didn’t believe it was necessary to introduce stricter measures despite rising numbers, Merkel acerbically replied: “Then we’ll be sitting here again in two weeks’ time.” The response has already become legendary in Germany, and she was right. Even as other decision-makers fell victim to the hubris of believing they could ignore the conclusions drawn by medical experts, Merkel’s allegiance remained stubbornly to the facts. Unfortunately, though, the insistence on timely and extensive closures and shutdown extensions has remained her only real response to the crisis. Nothing has been added to the toolbox. What was good for the first wave, though, has proven to be drastically insufficient for the second or third wave. The more challenging aspects of pandemic response have not turned out nearly as well.

Somehow over the years, the narrative has taken hold that Merkel is a gifted leader when confronted by crisis. That is perhaps a function of her indisputable ability to remain calm even as all those around her lose their cool. This narrative, though, misses the flipside of this calm: her passivity. The problem isn’t that Angela Merkel has made a series of missteps in the corona crisis. The problem is all those things that she never even tried. It is essentially the equivalent of political malpractice.

Almost nothing that could have slowed or even prevented the development of the second wave in Germany was implemented early and decisively. The Corona Warn App used to alert people to possible exposure to the disease has remained what it always was: a joke. The people of Germany still haven’t been sufficiently supplied with medical masks, much less FFP-2 masks, which offer better protection. The fact that retirement and care homes have to be protected with all means available has been widely known since last spring. But bickering over the funding required to do so continues to this day. Rapid tests have been on the market since the early summer, but instead of the state buying up billions of them to distribute among the German population, there was only an effort to reserve certain contingents for care homes, with the rest being left up to the free market.

Health agencies, whose tracing capacities were identified as the central factor in imposing or relaxing lockdowns, are still struggling with personnel shortages and face technical shortcomings reminiscent of German municipalities in the 1990s. And what about the commissioning of studies to find out more precisely which areas of society are responsible for more infections and which are not? Without those studies, policymakers remain in the dark and are forced to fight the virus with a sledgehammer instead of opting for more precise measures. The list of missed opportunities could be continued ad infinitum.

The chancellor, of course, is not responsible for every public sector failure. District administrators, data protection commissioners, state cabinet members, state governors and even some federal ministers likewise share some of the blame for the lapses. And for some areas, such as education, the chancellor has no formal responsibility at all. Still, nobody would have complained had she come up with an outline for how schools could function better in the middle of a pandemic.

There has been no app summit under her leadership. No rapid test summit. No mask summit. No retirement home summit. No health agency summit. No school summit. And the chancellor’s vaccination summit didn’t take place, for example, in July. Nor was it held in September or before Christmas. It didn’t even take place in the first weeks of the year, by which time it had already become abundantly clear that Europe was facing a severe vaccine shortage and that continued smugness was radically misplaced.

Disappointing to Say the Least

Over the summer, the chancellor insisted that all negotiations with vaccine producers be left to the European Commission. As a result, her interest in those negotiations quickly evaporated. The fact that Germany held the rotating presidency of the Council of the EU at the time did nothing to change that lack of curiosity. And this despite the fact that absolutely nothing was more crucial for the welfare of Germany and the rest of the Continent. The result was a shopping spree that could hardly have been more hesitant and miserly – the results of which have become all too well-known.

But then, a vaccine summit did take place at the Chancellery. Last week. But only because the chancellor was pressured into it by cabinet members from the center-left Social Democrats (SPD), her junior coalition partner. Given the lack of enthusiasm, it is hardly surprising that the results of that summit were disappointing to say the least.

Nothing that could have joined shutdown measures and social distancing rules as useful tools to confront the pandemic was taken control of by the chancellor. And she only intervened on vaccine acquisition when it was far too late. Some of the summits that never took place might have failed, while others likely would have produced only half-baked results. But each attempt would have been worth it. Because it would have indicated a desire to do whatever it took. It would have born witness to the quest for a coherent strategy.

Attitude and approach are important. Esprit is vital. If there is a lack of ambition at the top, those lower down only rarely exhibit greater elan. Ambition must be set by example. Aspirations must be clearly communicated, goals must be set and initiatives launched. When none of that happens, you get appearances like that of Economics Minister Peter Altmaier on a primetime talk show a week ago. He said that the government still has no overview of what plants in Germany could perhaps be converted into vaccine production facilities. “I don’t know how many people there are who know where in Germany such things could be made available,” Altmaier said. At this stage in the crisis, such a statement is nothing short of a confession of failure. It is also a prime example of the ponderousness that has been characteristic of the Merkel era. The talk show ended with the hostess issuing an appeal to her viewers: “If you are by chance the owner of a pharmaceutical company and think you could help, please come forward!”

A Lack of Ambition

The first of two instances when Merkel really showed a willingness to change something, to shape a new path forward, was in the years between 2003 and 2005. It was just before she was elected chancellor for the first time, and she campaigned on a promise to introduce far-reaching reforms to Germany’s health care and tax systems. Critics accused her of heartlessness and of neo-liberalism. But no matter what you think of her proposals, they were ambitious. Paradoxically, though, the desire to invest political capital in enacting change almost cost her the election. Voters punished her in the 2005 election and her victory margin was much slimmer than had been expected. Merkel took the lesson to heart – and her tenure in the Chancellery became an exercise in risk avoidance and lack of ambition. Instead of saying things like “I want” or “we want,” the motto of her governing style turned out to be: “Let’s wait and see what happens before we react.” Even today, there isn’t a single ambitious project or reform that is widely associated with Merkel’s name. What we will remember is her pleasant, deliberate, modest and self-effacing leadership style.

The second instance when Merkel really wanted something and was willing to take a risk to get it came in fall 2015. Her decision to keep Germany’s borders open, thus allowing hundreds of thousands of refugees and migrants to arrive in the country, was courageous. For a time, it even looked as though the decision had been informed by a deep-seated conviction. But that impression evaporated when it became clear that her government was going to do very little to integrate the newcomers. Just like on climate policy, the courageous beginning was replaced by a marked lack of follow-through.

For years, this temperate, reactive style of leadership served Germany well. But the corona pandemic has put the limits of this approach on full display. Leaders who are unable to formulate a vision for what the future should look like are damned to live from day to day. It has now become apparent to all just how unsatisfactory this approach can be, with the country’s leadership completely devoid of imagination and ambition. No one, perhaps, better embodies this passive lack of ambition than Chancellery Chief of Staff Helge Braun. If Braun and Merkel really do believe, as he claimed, that “essentially nothing really went wrong” with vaccine acquisition, that would be a bitter pill to swallow. On the other hand, you just have to set your sights low enough to ensure that you hit your mark.

Despite all of that, Angela Merkel is still romanticized by large swaths of the German population, including journalists. Criticism of the chancellor is seen as unseemly in some quarters. Perhaps it is because Merkel is the first woman to have held her post, the time for which had clearly come after centuries of male rule. Perhaps it is because of her reputation as a hard worker and her excellent understanding of even the most arcane policy detail. Perhaps because her modesty is a welcome contrast to other decisionmakers – particularly when balanced against the testosterone-driven creatures who tend to populate the national and international stage. Perhaps it is all of these factors combined that make it difficult to arrive at a sober view of her leadership abilities – and shortcomings.

Gerhard Schröder’s fist-on-the-table leadership style reached its limits in 2005. The zeitgeist had moved on and it was time for something new. Angela Merkel was there to take advantage. Now, though, after 16 years, Merkel’s leadership style has also run its course. It is time for a change.