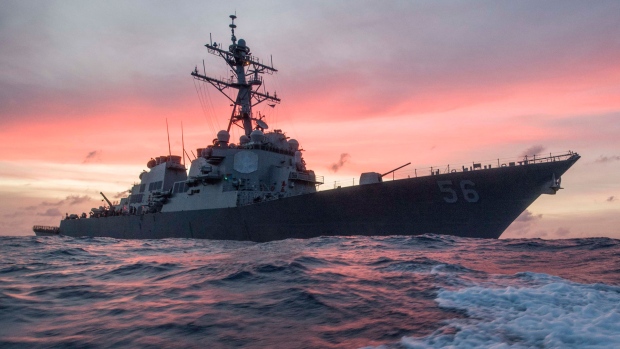 The United States Navy sent a guided-missile destroyer through the Taiwan Strait on Thursday, the first time a U.S. warship has gone through the waterway that separates China and Taiwan during the Biden administration.

The Japan-based USS John S McCain made the routine transit in accordance with international law, Lt. Joe Keiley, a spokesperson for the U.S. Navy’s 7th Fleet, said in a statement.

“The ship’s transit through the Taiwan Strait demonstrates the U.S. commitment to a free and open Indo-Pacific. The United States military will continue to fly, sail and operate anywhere international law allows,” Keiley said.

The issue of self-governed Taiwan has been one the first big foreign policy challenges for U.S. President Joe Biden.

Beijing claims full sovereignty over Taiwan, a democracy of almost 24 million people located off the southeastern coast of mainland China, despite the fact that the two sides have been governed separately for more than seven decades.

On the first weekend of the Biden presidency, China dispatched two large formations of warplanes close to the island, prompting Taipei to take defensive measures including scrambling fighter jets to monitor the Chinese flights.

U.S. warships transiting the Taiwan Strait are seen by Beijing as provocations that threaten stability in the region by encouraging supporters of Taiwanese independence.

The last transit occurred on New Year’s Eve when the McCain and a second destroyer, the USS Curtis Wilbur, went through the strait, according to U.S. Navy statements.

U.S. warships transited the waterway 13 times in 2020, according to the U.S. 7th Fleet, the most since 12 such transits in 2016, the final year of former President Barack Obama’s administration.

The U.S. showed a strong commitment to Taiwan’s defense during former president Donald Trump’s administration by approving the sale of sophisticated military hardware to Taipei, including F-16 fighter jets, advanced missiles and main battle tanks, while sending high-level envoys to the island.

Recent statements from the Biden administration suggest there will be no pullback on these actions.

“There’s been a strong and long bipartisan commitment to Taiwan,” new U.S. Secretary of State Antony Blinken told his confirmation hearing last week. “Part of that commitment is making sure that Taiwan has the ability to defend itself against aggression. And that is a commitment that will absolutely endure in a Biden administration.”