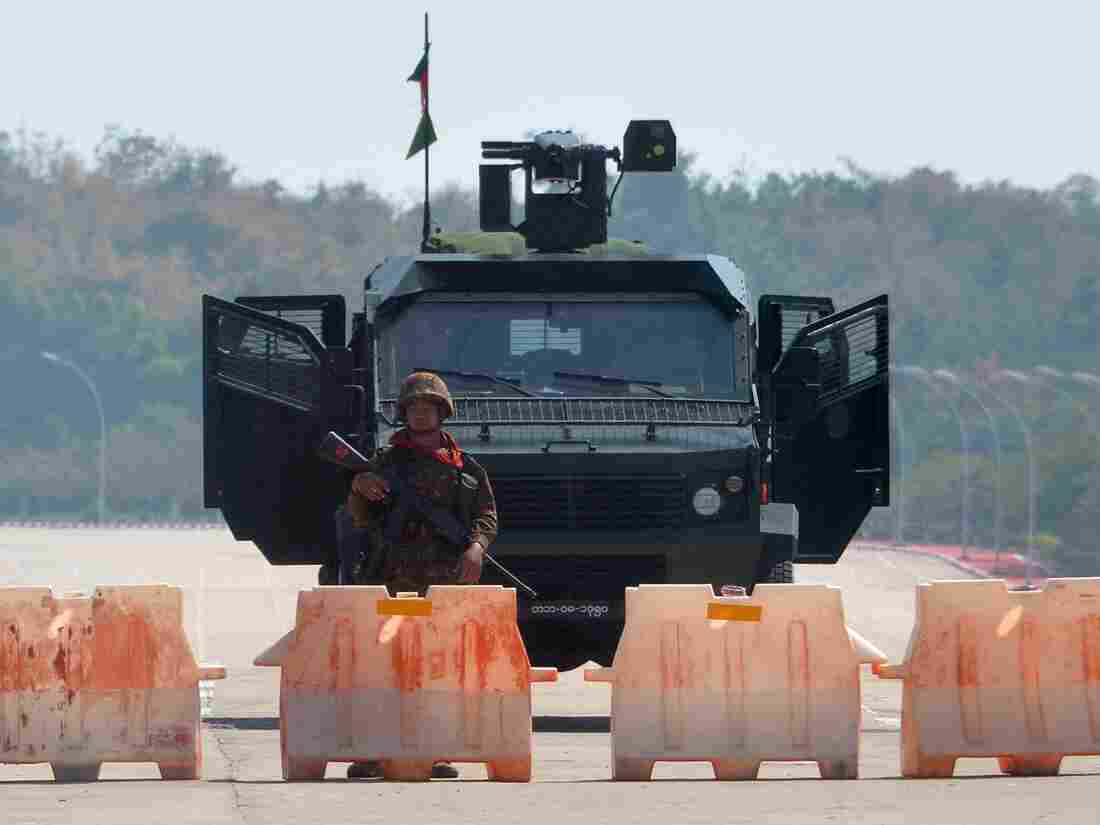 A soldier stands guard on a blockaded road to Myanmar’s parliament in Naypyidaw on Monday, after the military detained the country’s de facto leader Aung San Suu Kyi and other officials and activists. AFP via Getty Images hide caption 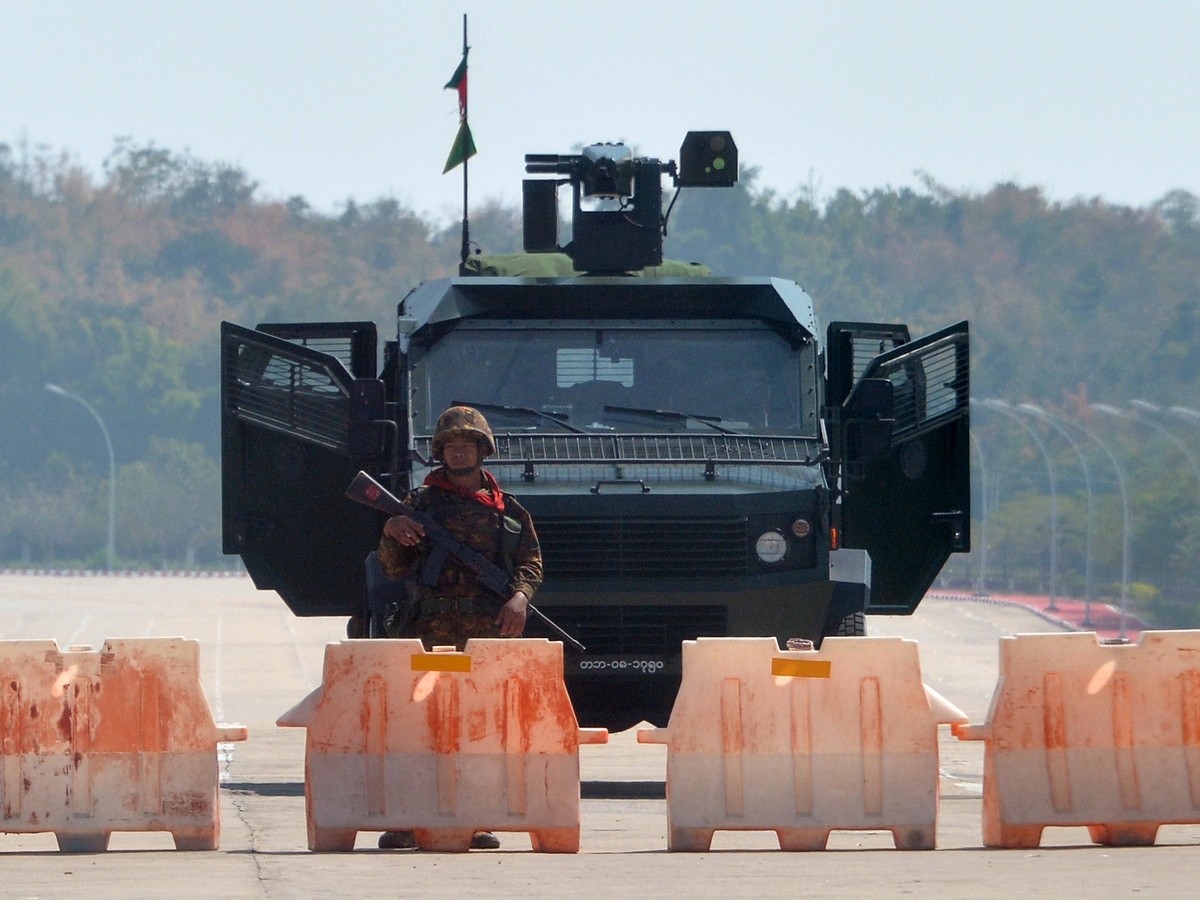 A soldier stands guard on a blockaded road to Myanmar’s parliament in Naypyidaw on Monday, after the military detained the country’s de facto leader Aung San Suu Kyi and other officials and activists.

Charles Dunst (@CharlesDunst) is a visiting scholar at the East-West Center in Washington, an associate at LSE IDEAS and a contributing editor of American Purpose, Francis Fukuyama’s new magazine.

Early on Monday morning, tanks, helicopters, soldiers and police officers marched through the streets of Naypyidaw, the capital of Myanmar. Within hours, the military, the Tatmadaw, had seized control of the government — canceling a planned parliamentary session, cutting off Internet networks, shutting down the stock market and commercial banks, taking over the airport and airwaves, and placing under arrest scores of politicians and civil society activists, including Aung San Suu Kyi, the civilian government’s de facto leader. The military-owned Myawaddy TV station, citing supposed voter fraud in the preceding elections that Suu Kyi’s National League for Democracy (NLD) won handily, soon after declared a “state of emergency” in which Senior Gen. Min Aung Hlaing would govern for one year.

With this coup d’état, the Tatmadaw effectively brought an end to the country’s quasi-democratic experiment that began in 2011 when the military, which had ruled since 1962, allowed parliamentary elections and other reforms. It was a starkly unceremonious finale to a democratization project that was often marked by ceremony, including President Barack Obama’s 2012 visit to the country.

But this is not the same Myanmar that it was when the Tatmadaw last ruled; much has changed in 10 years. When the Tatmadaw last ran the country with an iron fist, there was almost no Internet in Myanmar and mobile phones were outrageously expensive, meaning that many people were cut off not only from the world, but from the goings-on in their own nation’s halls of power. This, however, is no longer the case — something Tatmadaw leaders may not realize, because they are still somewhat disconnected from society. With the ground having shifted so drastically in the last 10 years, the Tatmadaw may not find it possible to run Myanmar. That puts the country on the precipice of two very different futures: one in which the Tatmadaw uses this coup to force negotiations to gain more governmental power, the other in which the Tatmadaw disastrously struggles (as it previously did) to govern the country. The latter is a frightening scenario, because Myanmar remains awash in weapons and marred by ethnic and religious resentment, and thus ripe to descend into chaos.

In November, Suu Kyi’s NLD party won a commanding victory in elections seen as a referendum on her troubled government, seizing 83% of the available seats. Yet thanks to the country’s only quasi-democratic constitution — which the Tatmadaw drafted in 2008 — the military retains an unelected quota of 25% of parliamentary seats, also controlling the defense, interior and borders ministries. Despite this institutionalized representation, the military alleged voter fraud without evidence. This, to put it simply, is because the military considers the NLD a threat to its constitutional privileges, and because the Tatmadaw understands that it cannot win the presidency through legitimate elections. The military-backed Union Solidarity and Development Party’s recent humiliating showing made this only more evident. 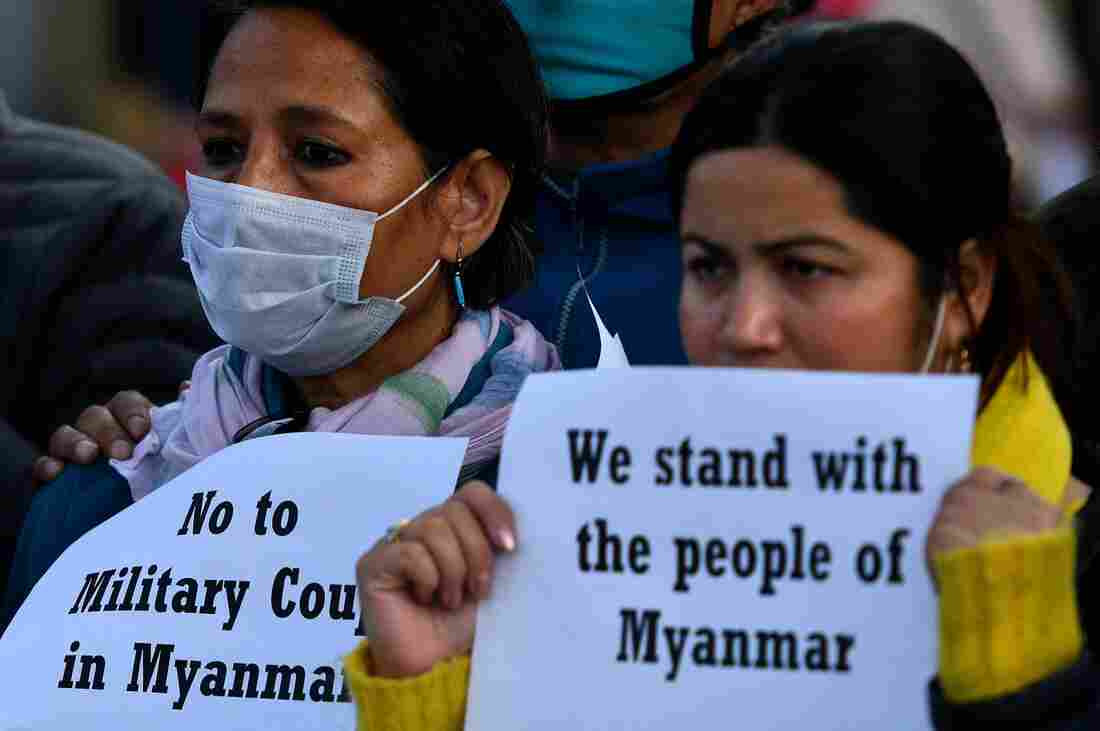 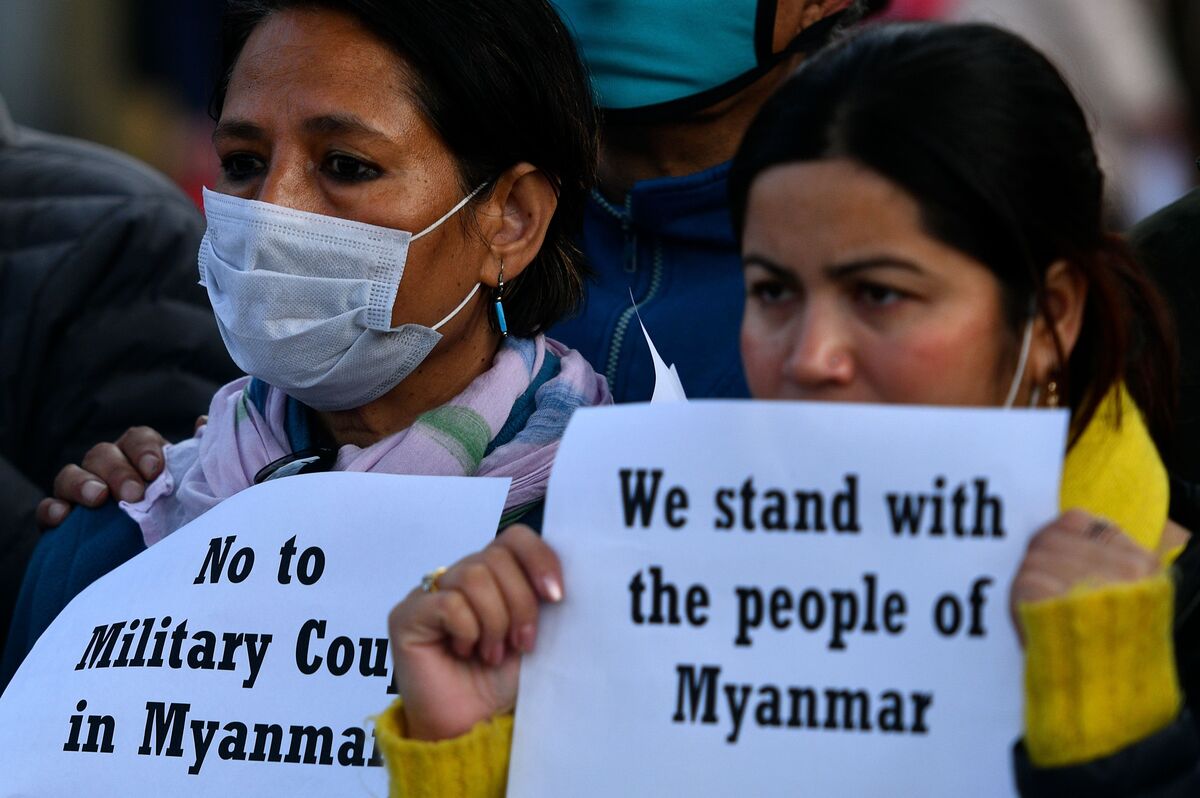 Moreover, Gen. Min Aung Hlaing, for his part, has long harbored his own presidential ambitions, seeking the position for both its prestige and the ways in which he could exploit it to cement his family’s wealth. The fact that he is also “one of the most wanted men on the planet” for leading the Tatmadaw’s 2017 genocidal campaign against the Rohingya Muslims seems to have augmented the general’s anxiety about his future. From his perspective, Myanmar was already isolated by the international community, and he was already facing widespread condemnation; the question, for him, was not so much why seize power, but why not? He and his military, knowing that no foreign power would dare invade to reinstall Suu Kyi and the NLD, did not have much to lose from doing so. But they had everything to gain.

In recent weeks, after talks between Tatmadaw and civil leaders failed, the latter promptly began floating trial balloons for a potential coup. Last week, a spokesman for the armed forces said the military would “take action” regarding supposed voter fraud and refused to rule out a coup. On Monday, the military then made its move, appointing Gen. Min Aung Hlaing as the country’s leader.

But now the Tatmadaw is at a crossroads. After the military allowed Myanmar to semi-democratize and move away from dictatorship, this same force will not be able to put the cats of democracy and technology back in the bag, so to say. Moreover, given that the Tatmadaw has long violently persecuted the Rohingya, and has a poor record of relations with other ethnic and religious minorities, it is nearly impossible to imagine that the military will be able to effectively govern these groups rather than foment even more armed resistance from them. The NLD and Suu Kyi were certainly no champions of the Rohingya or other minorities, but the Tatmadaw’s recent arrests of minority leaders could make the NLD more attractive for these minorities as a lesser of two evils.

Further complicating the Tatmadaw’s task of ruling are the economic downturn caused by the COVID-19 pandemic, widespread poverty, the proliferation of weapons, and perhaps even China’s opposition to the coup. Not only is Myanmar a powder keg “already at war with itself,” as Thant Myint-U, a historian of Myanmar, put it, but the country’s backers in Beijing are unlikely to support the military takeover. China is not an all-weather friend but a fair-weather one: Its leaders want a stable government that can protect Chinese investments like the port in Kyaukpyu. A Tatmadaw-run regime, thanks to the international opposition and daunting domestic context it will certainly face, promises to be anything but stable.

If the Tatmadaw recognizes reality — that actually governing will be staggeringly difficult, and perhaps even impossible — its leadership could use this coup as a power play to pressure the NLD into making some kind of deal that enshrines even further military power in the country’s political system. This, to put it bluntly, would be the wise move, as a failure to do so could only further deepen Myanmar’s extant internal conflict.

Meanwhile, the international community, and particularly the United States, should certainly respond, but power brokers would be wise to not deify Suu Kyi and the NLD. She backed the military’s violence against the Rohingya because it was popular with her fiercely ethnically and religiously nationalistic base. Both she and her party have illiberal tendencies that cannot be papered over as Washington and Brussels try to return her semi-democratic ousted government to power. Americans, Europeans and others must therefore push for the civilian government’s reinstatement while avoiding the binary thinking — “Suu Kyi good, military bad” — that previously defined their policy, and led to many mistakes dating back to 2012.

Washington and Brussels may feel the need to impose sanctions, but they should do so in ways that do not aggravate the country’s existing poverty crisis. If sanctions are required for public relations purposes, they must be targeted at military leaders, rather than imposed on Myanmar writ large.

Beyond imposing sanctions, though, the Biden administration and its partners must quietly engage with and convince the military to, in effect, leverage its coup to secure more power in an NLD-led government. This is far from an ideal or even democratic solution — particularly for an administration stocked with so many Obama administration veterans who played a role in opening Myanmar — but it is, for now, the only one that avoids reversing the last decade of progress and plunging Myanmar into even greater civil war and deprivation. It is also one that China is likely to support.

Without such a deal, the Tatmadaw will try and fail to govern, leading to even more violence, more poverty and more crime. This is an outcome no involved party wants. But to avoid it, the Tatmadaw, the NLD, Suu Kyi and the international community will have to avoid letting their respective perfect outcomes be the enemy of a good one, which at this gloomy moment would be anything that promises stability.