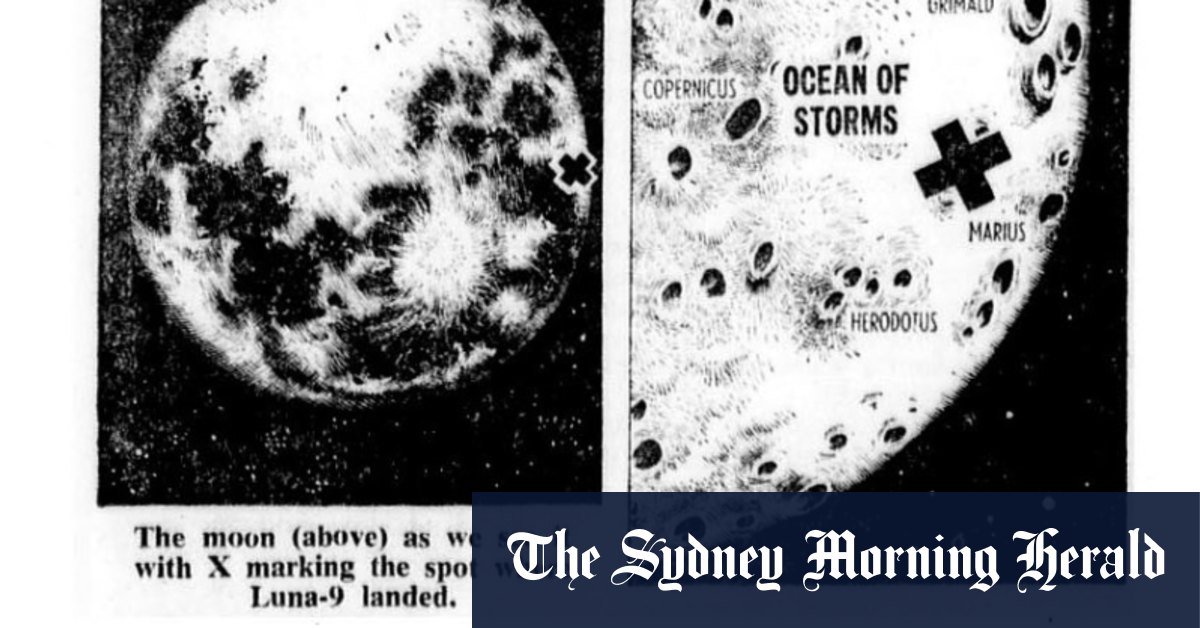 President Johnson said Soviet scientists had made “a major contribution to man’s knowledge of the moon and of space.“

The British Prime Minister, Mr Harold Wilson, said in a message to the Soviet Prime Minister, Mr Kosygin: “This historic step forward in man’s exploration of space has justly earned the admiration of us all and I send you my heartiest congratulations.“‘

“I think it is a very great leap forward — probably so far the outstanding event of the year.” he said.

Professor Pierre Tardy, a member of the French Academy of Science, said the soft landing did not necessarily mean that Russia had laken the lead in the race to put a man on the moon.

The science editor of the “New York Times,” Mr Walter Sullivan, said the first landing, intact, of a vehicle on another celestial body marked the start of true planetary exploration.

Soviet scientists in Kazakhstan began receiving coded information from Luna-9 as soon as the 1½ ton spacecraft landed on the moon in the area of the Ocean of Storms, west of the Reiner and Marius craters.

They are reported to be studying television close-ups of the moon’s surface to determine its hardness and composition in preparation for a manned moon landing.

It soft-landed on the moon 3½ days later and began transmitting television signals for about 20 minutes.

The landing was nearly 2½ hours earlier than expected. British scientists at Jodrell Bank, Cheshire, picked up the rocket on their 250ft bowl telescope as it appeared over the horizon.

Sir Bernard Lovell, director of Jodrell Bank, called the landing “historic” and added: “This must put the Russians ahead of the United States in the race for the moon.”

He said the spacecraft’s retro-rockets were fired when it was between 20 and 30 miles from the moon’s surface.

“It seems to have been a perfect landing.” he added.

The observatory reported that it was receiving “superb signals” from the spacecraft.

Space experts said today Luna-9’s feat meant that Soviet scientists had solved one of the most complicated tasks facing them at the present stage of space exploration.

The capsule apparently landed gently on the airless moon without the aid of parachutes.

Russia’s scientists had to steady Luna-9 from a speed of about a mile a second to almost nothing as it landed.

Tass News Agency confirmed that Luna-9 had transmitted pictures of the lunar landscape to earth.

The announcement said Luna-9 “has been scanning the lunar landscape and transmitting it to earth’s surface.“

The space vehicle landed in an area of the moon which will be in direct sunlight for almost two week, allowing a number of pictures to be sent if Lunar-9 continues to work properly.

So far Russian announcements have given less information about Luna-9 than any of the earlier Soviet efforts.

It has not been disclosed yet whether the spaceship is equipped to take off and return to earth — a stage which must be reached before a cosmonaut’s life can be risked.

U.S. scientists say the first U.S. project to place working instruments on the moon is due between April and July.

Although U.S. spacecraft have sent back detailed pictures of the lunar surface just before crashing, the United States has not yet achieved a “soft” landing.

The first Surveyor spaceship is expected to be launched before the end of June.

The date has been postponed twice because the spacecraft has not passed all acceptance tests.

America’s first major success in its moon exploration program came in July, 1964, when Ranger-7 relayed to earth the first closeup photographs of the lunar surface on the moon’s visible side. More pictures were taken by Ranger-8 in February last vear, and Ranger-9 in March.

Some photographs sent back just before the Rangers crashed on the moon showed rocks and other small features, but did not answer the vital question: Can a man walk on the moon? Luna-9 may do so.

The results of the Luna-9 observations may, in fact, reduce some American requirements for independent testing of the moon’s surface.