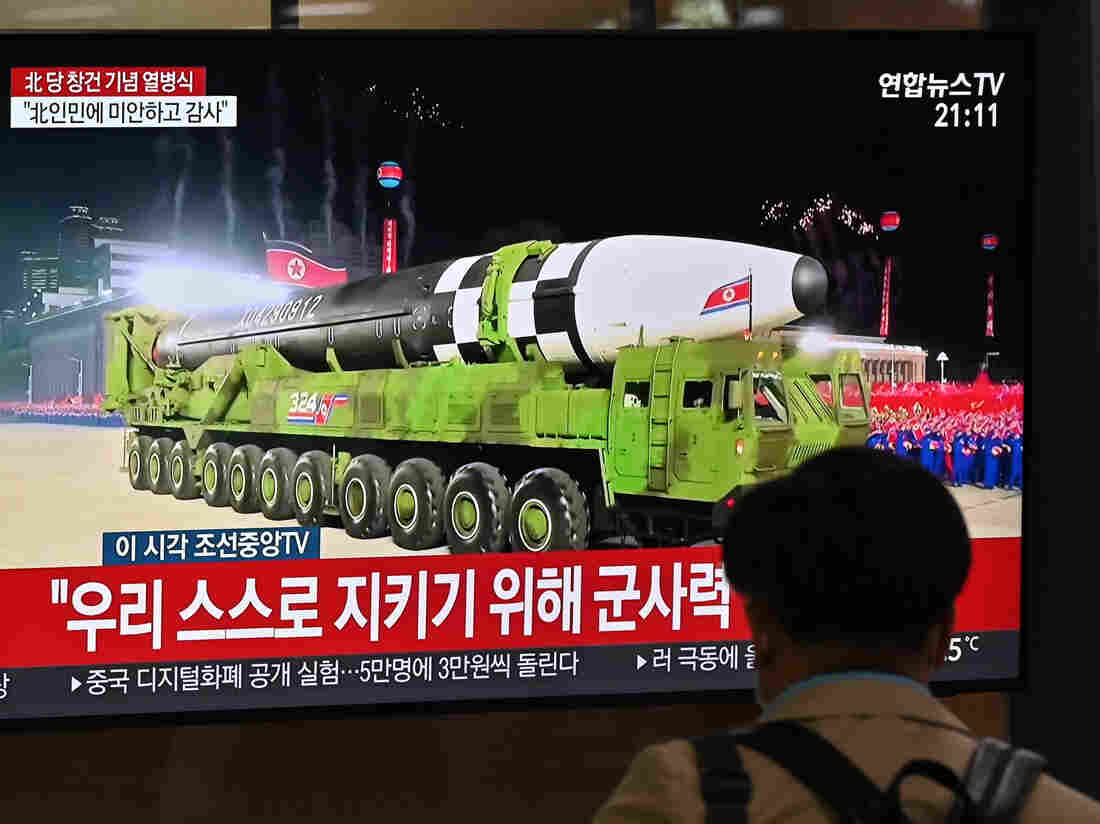 A man watches a news broadcast of a military parade commemorating the 75th anniversary of North Korea’s ruling Workers’ Party held in Pyongyang, at a railway station in Seoul. Jung Yeon-je/AFP via Getty Images hide caption 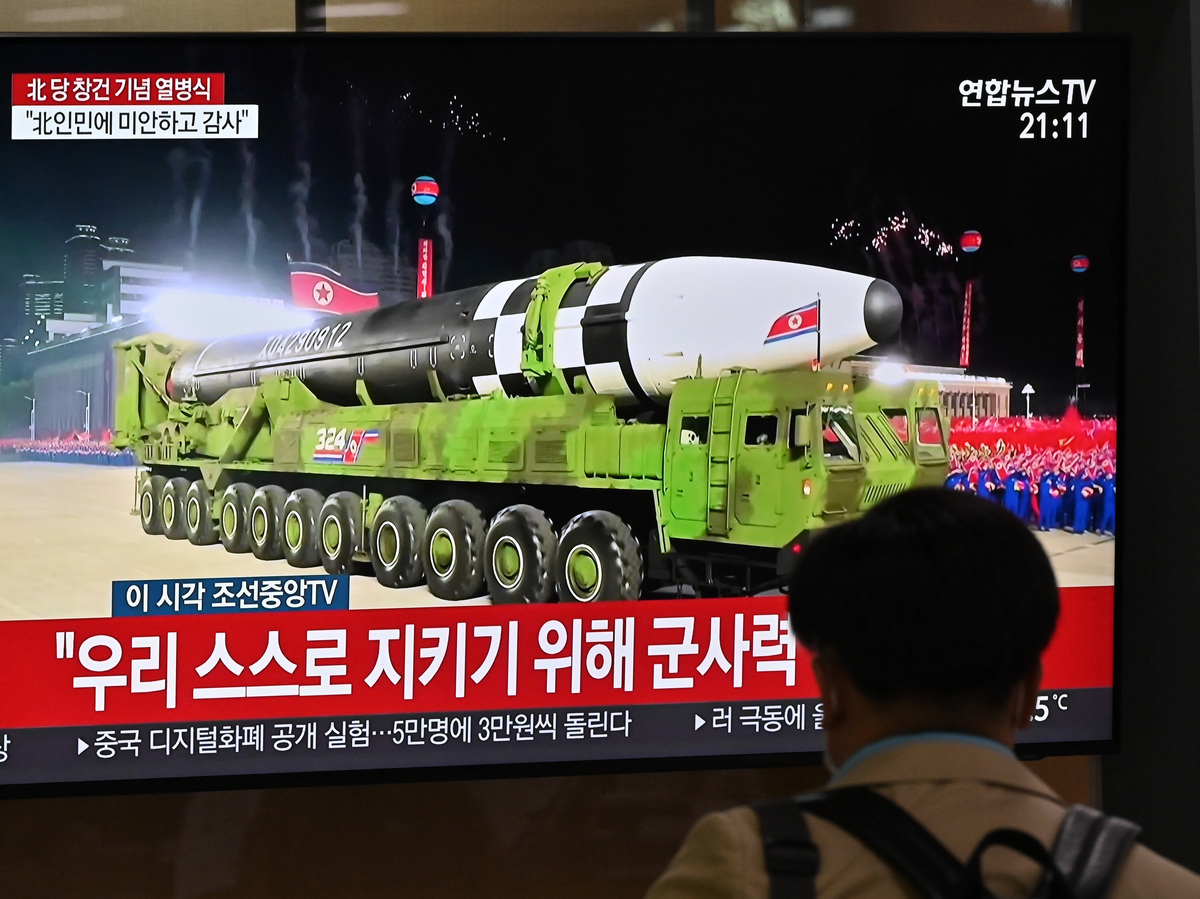 A man watches a news broadcast of a military parade commemorating the 75th anniversary of North Korea’s ruling Workers’ Party held in Pyongyang, at a railway station in Seoul.

Kim Jong Un began a military parade in Pyongyang on Saturday with what was an unprovocative speech without any mention of the United States. But then, the North Korean leader displayed what appeared to be several new strategic weapons, including some that could potentially hit the U.S. mainland.

The highly choreographed event in the North Korean capital marked the 75th anniversary of the ruling Workers Party. Some sort of display of new weaponry — which experts believe could serve as leverage in future nuclear negotiations — was expected, as Kim had promised late last year to unveil a new strategic addition to the nation’s arsenal.

The parade was staged in the early hours of Saturday morning local time, but not broadcast by state media until the evening. Foreigners in the capital were reportedly instructed to steer clear of the event.

But he added that the country’s military deterrent would only be used in self-defense and “will never be abused or used first under any circumstances.”

Following his remarks, troops marched and military hardware rolled past, including what appeared to be an upgraded and enlarged version of the Hwasong-15, an intercontinental ballistic missile (ICBM) thought to be capable of hitting the U.S., and the Pukguksong-4, a new submarine-launched ballistic missile.

But Lee Ho-ryung, a researcher at the Korea Institute for Defense Analyses, a government-funded, Seoul-based research institute, cautions that North Korea sometimes puts on parade replicas or mock-ups of weapons which are not yet fully operational.

She adds that putting the weapons on parade is a low-risk way to send a message to the world. “They’re not as likely to conduct a test launch that would provoke countries such as the U.S.,” she says, “because they want to leave room for diplomacy.”

North Korea has not tested an ICBM since 2017. But in January, Kim Jong Un indicated that he had become disillusioned about the prospect of reaching a deal with the U.S., and said he was no longer bound by a self-imposed moratorium on testing nuclear weapons.

The North continued to test a variety of short-range missiles and rockets this year, which have drawn a muted response from President Trump, as the weapons cannot hit the U.S., although they can reach South Korea, where some 28,500 US troops are stationed.

Lee argues that Kim Jong Un focused on the parade to mark the party’s anniversary, in order to cover up and compensate for the fact that he has failed to achieve his economic goals.

“All they have to call an achievement is reinforcing their defense powers,” she says, because the leadership has failed to meet the economic targets set for the ruling party’s birthday. Pyongyang has made no mention lately, for example, of a new general hospital in the capital, which was supposed to be completed by the anniversary.

To Kim’s domestic audience, Lee says, “the main message would likely be that it is only because of their military powers that they have been able to hold on this far.”

Kim Jong Un appeared emotional, as he spoke of the economic hardships North Korea’s people have endured this year. The country is reeling from international sanctions, a coronavirus epidemic and three back-to-back typhoons which destroyed thousands of homes and flooded crops.

The country’s only land border with China has been closed since January, and border guards have reportedly been given shoot-to-kill orders to stop unauthorized entry into the country. Notably, none of the leaders, soldiers or cheering spectators shown in state media footage were wearing masks.

On a conciliatory note, after months of inter-Korean tensions, Kim wished South Korea a speedy recovery from the coronavirus epidemic, voicing hope that the two Koreas will “join hands” after the health crisis passes.

NPR’s Se Eun Gong in Seoul contributed to this report.