Confusion has emerged over when Donald Trump was diagnosed with coronavirus after it emerges the president’s vital signs were “very concerning” before he was admitted to hospital.

A person “familiar with the president’s condition” told Associated Press that he was given supplemental oxygen at the White House before he was flown to hospital on Friday.

Questions are also being raised about when Mr Trump, 74, developed coronavirus symptoms and whether he should have continued on the campaign trail this week.

Latest coronavirus updates from UK and around the world

Speaking to reporters outside the Walter Reed Medical Center on Saturday, his physician Dr Sean Conley said he was “72 hours into his diagnosis”.

But he later clarified his statement, revealing he had made a mistake.

In a memo sent after his statement, he said: “This morning while summarizing the president’s health, I incorrectly used the term ‘seventy two hours’ instead of day two and ‘forty eight hours’ instead of ‘day two’ with regards to his diagnosis and the administration of the polyclonal antibody therapy.

“The president was first diagnosed with COVID-19 on the evening of Thursday, October 1st and had received Regeneron’s antibody cocktail on Friday, Octobed 2nd.”

Mr Trump travelled to a rally in Minneapolis on Wednesday and a fundraiser in New Jersey on Thursday, seemingly unaware he may have been infected.

Previously, there was no suggestion Mr Trump thought he was infected before his aide Hope Hicks was diagnosed on Thursday.

In the statement outside the hospital, Dr Conley said although Mr Trump has been suffering from a mild cough, nasal congestion and fatigue – he is improving.

“This morning, the president is doing very well,” he added.

He said he has been “fever free for 24 hours” and that his heart, liver and kidney functions are all “normal”.

Dr Conley said Mr Trump is currently not on oxygen and is having no difficulty breathing.

The president’s physician said he has been put on a five-day course of remdesivir – an antiviral drug originally created to treat Ebola.

He was given another experimental treatment – an antibody drug developed by Regeneron – before he was flown to hospital by military helicopter on Friday.

Dr Conley said his medical team “remain cautiously optimistic” about the president’s health and that he told them as they completed their rounds this morning: “I feel like I could walk out of here today.”

His doctor added: “It should be clear he’s got plenty of work to get done from the chief of staff – and he’s doing it.”

Doctors, Nurses and ALL at the GREAT Walter Reed Medical Center, and others from likewise incredible institutions who have joined them, are AMAZING!!!Tremendous progress has been made over the last 6 months in fighting this PLAGUE. With their help, I am feeling well!

Mr Trump is considered to be at higher risk of serious complications from coronavirus based on his age, the outcome of his recent physical tests, and the fact that he categorised as obese.

His medical team say they will monitor him closely for any complications from either the virus itself or the drugs he is being given.

Between a week and 10 days into having COVID-19, it can cause patients extreme inflammatory symptoms, with the president’s doctors saying they are “really concerned” about how he will fare during that phase of the illness.

But on Saturday, Mr Trump tweeted: “Doctors, Nurses and ALL at the GREAT Walter Reed Medical Center, and others from likewise incredible institutions who have joined them, are AMAZING!!!Tremendous progress has been made over the last 6 months in fighting this PLAGUE. With their help, I am feeling well!”

Please use Chrome browser for a more accessible video player 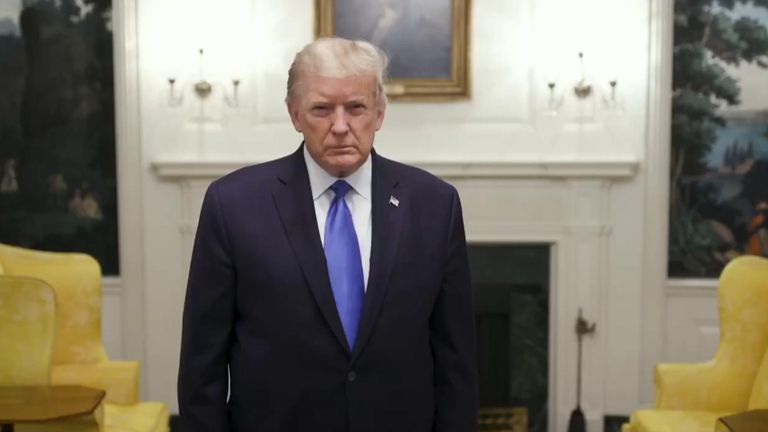 He added: “OUR GREAT USA WANTS & NEEDS STIMULUS. WORK TOGETHER AND GET IT DONE. Thank you!”

The president announced that he and his wife Melania had tested positive for coronavirus in a tweet in the early hours of Friday morning.

Soon after Marine One left the White House on Friday, he posted a video on Twitter that said: “I think I’m doing very well but we’re going to make sure that things work out, the First Lady is doing very well, so thank you very much I appreciate it, I will never forget it.”

Please use Chrome browser for a more accessible video player 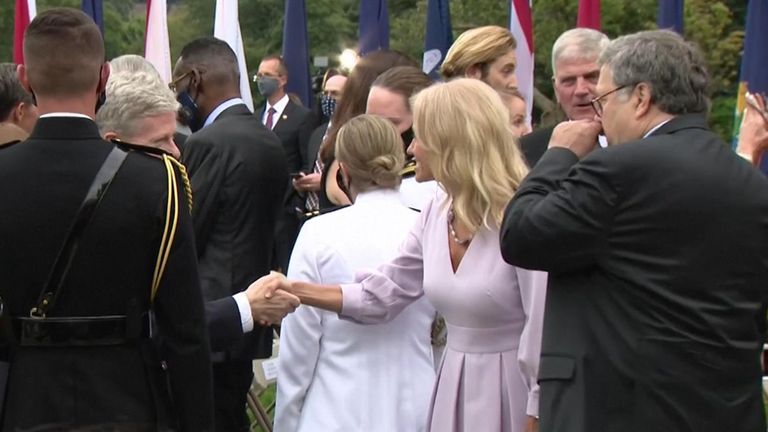 The White House said the decision to take Mr Trump to the military hospital was “out of an abundance of caution and at the recommendation of his physician and medical experts”.

At least seven people who attended an event at the White House last week have also tested positive for COVID-19 – after guests were seen hugging, fist-bumping and not wearing masks.

Overall, a number of Mr Trump’s aides and allies have fallen ill with coronavirus – including Hope Hicks, one of the president’s closest confidantes.

In other developments, Vice President Mike Pence – who has tested negative – will be taking Mr Trump’s place at a Make America Great Again event in Arizona.

Sky News correspondent Sally Lockwood, who is outside the hospital where the president is being treated, said: “Mr Pence’s event on Thursday could raise eyebrows.

“But these campaign rallies have been hugely controversial in the midst of a pandemic – with people closely packed together, no social distancing, and many people not wearing face masks.”

Sudan to normalize ties with Israel, in new breakthrough for Trump

Israel won’t oppose US sale of ‘weapons systems’ to UAE