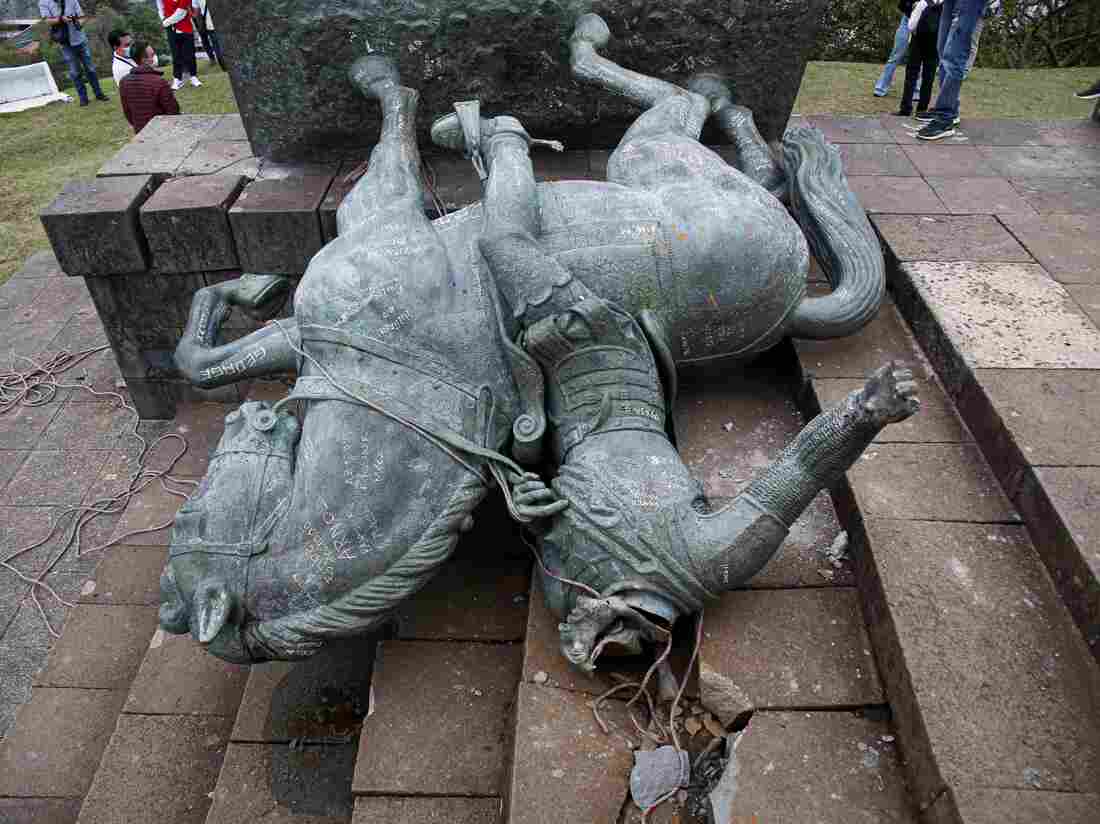 The statue of Sebastián de Belalcázar, a 16th century Spanish conquistador, lies on the ground after it was pulled down by Indigenous people in Popayán, Colombia, earlier this year. Julian Moreno/AFP via Getty Images hide caption 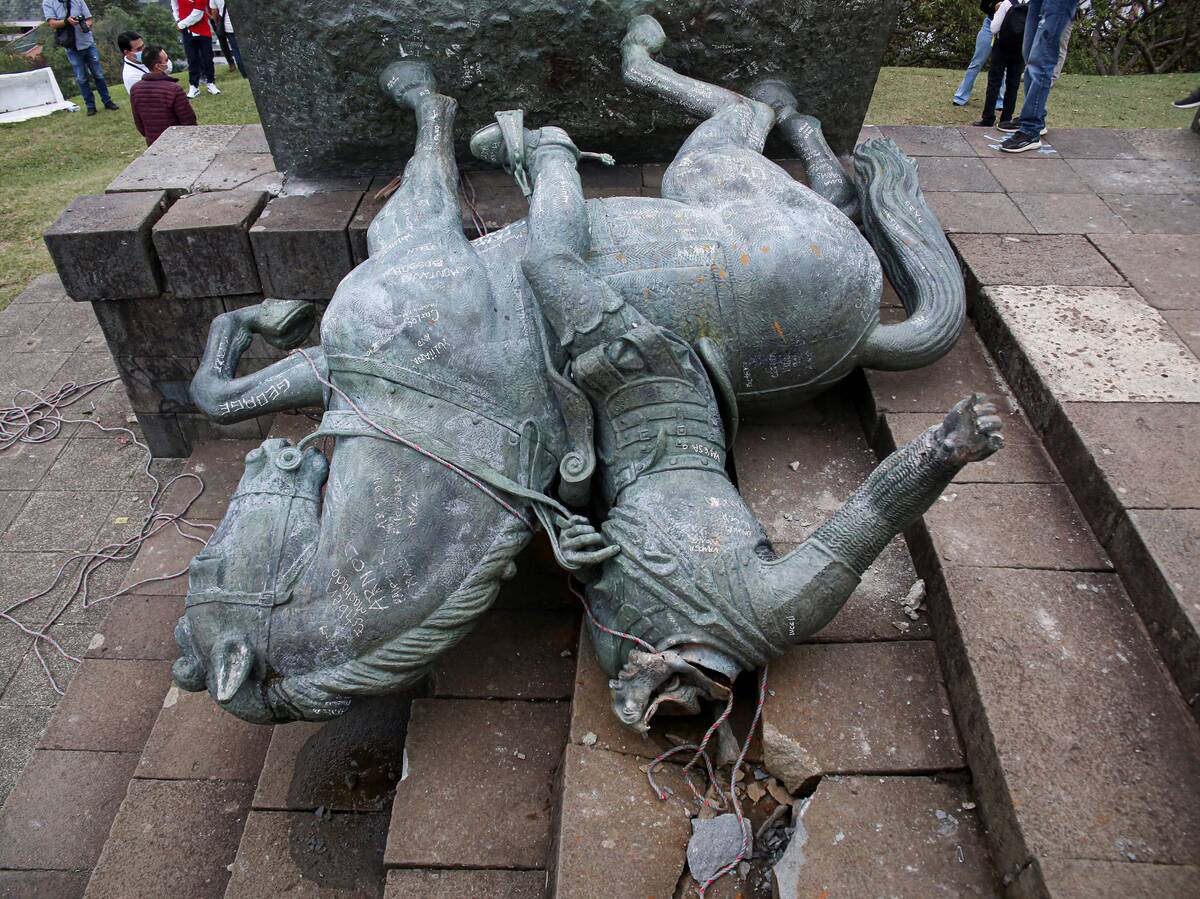 The statue of Sebastián de Belalcázar, a 16th century Spanish conquistador, lies on the ground after it was pulled down by Indigenous people in Popayán, Colombia, earlier this year.

The campaign to remove Confederate statues and other symbols of white supremacy in the United States is resonating in Latin America, where protesters have destroyed monuments to European colonizers who brutalized Indigenous populations.

The latest target was a statue of Sebastián de Belalcázar, a Spanish conquistador. He founded the Colombian cities of Popayán and Cali in 1537, while leading a military campaign that killed and enslaved of thousands of Misak Indigenous people.

After authorities foiled two previous attempts to remove the statue, located on the outskirts of Popayán, Misak leaders sent decoy protesters into the center of the city on Sept. 16, drawing police attention. Meanwhile, a smaller group of Misak approached the monument, used ropes to pull down it down, then pounded it with rocks, separating the head from the torso.

“The time has come to get rid of these statues all across the Americas,” said Jesus Maria Aranda, a Misak leader who noted that the de Belalcázar statue was built atop a sacred Misak religious site. “The conquistadors did so much damage to Indigenous peoples.”

Tearing down statues in times of political upheaval in Latin America is not new.

In Nicaragua, monuments to the 20th century Somoza dictatorship, which lasted more than four decades, were destroyed after Sandinista rebels seized power in 1979. In Venezuela last year, protesters destroyed a bust of the late President Hugo Chávez, who launched a socialist revolution that provoked the country’s worst-ever economic crisis.

But more often, protesters focus on representations of Christopher Columbus and other European explorers who first landed in the Americas at the end of the 15th century. During anti-government marches last year in Chile, Mapuche protesters toppled an effigy of the Spanish conquistador Pedro de Valdivia, who established the Chilean capital city of Santiago but is now widely reviled for waging war on the Mapuche.

All told, about 60 statues in Chile were damaged or destroyed during the protests, according to the National Monuments Council. Such acts are considered criminal vandalism, but they haven’t stopped. Last month, protesters in the Chilean town of Lumaco attacked a bust of Cornelio Saavedra, an army officer who led raids against the Mapuche in the 1800s. The protesters pulled it down and tossed it into a river.

“Every time these groups are faced with these kind of public monuments, they obviously are forced to relive their condition as victims of colonialism and violence,” says Arlene Tickner, an American who teaches international relations at Rosario University in Bogotá, Colombia.

In Mexico City, city council member Teresa Ramos wants all traces of the conquistadors erased. She is demanding the removal of statues of Columbus and Hernán Cortés, who conquered the Aztec Empire in the 1500s, and wants streets honoring their memory to be renamed.

In this same spirit, President Andrés Manuel López Obrador sent a letter last year to the Vatican and the Spanish government demanding a formal apology for human rights abuses committed during the conquest.

“There were massacres … The so-called conquest was done with the sword and the cross. They built churches on top of [Indigenous] temples,” López Obrador said in a speech last year at the ruins of an ancient Indigenous city in the state of Tabasco. “The time has come to reconcile, but first, they should ask forgiveness.”

Spain flatly refused. Pope Francis, during a 2016 trip to Mexico, had already asked Indigenous people for forgiveness for the way they had been treated. However, his words apparently failed to mollify López Obrador, who was elected president two years later.

Tickner notes that protesters across Latin America have been further inspired by their U.S. counterparts who, since the killing in May of George Floyd, have expanded their drive to remove monuments to Confederates and slaveholders.

“In viewing the whole discussion in the United States toward historical monuments that vindicate colonizers and racists, this slowly but surely seems to be affecting the debate in different parts of Latin America,” Tickner says.

In Colombia, the de Belalcázar statue had long been a point of contention.

It was erected in 1939 in Popayán, the capital of the western Colombian state of Cauca, which has a large Indigenous population. Besides bitterness over centuries-old abuses, the Misak and other Indigenous groups argue that agribusiness has occupied their traditional territory. In attempting to reclaim these lands, they have frequently clashed with government troops.

But there’s already been a backlash, with Carmen Vásquez, Colombia’s culture minister, blaming the Misak for “violent acts” against the nation’s cultural patrimony.

Rodolfo Segovia, president of the Colombian History Academy, describes the de Belalcázar statue as a relic of a previous era and says it “must be interpreted in that way.” Instead of tearing it down, he says, a better solution would have been to place a monument to the Misak next to the conquistador.

While inspecting the ruins of the statue, Popayán Mayor Juan Carlos López pointed out that its destruction won’t change the region’s tragic past.

“We are going to restore this statue and put it back on its pedestal,” he vowed. “It’s part of our history — a history we cannot erase.”